Hundreds of residents, environmentalists, outdoor enthusiasts, and concerned citizens are opposing proposed developments near St. Louis. In late 2017 a housing development was proposed for the bluffs above the Katy Trail in St. Charles County.  If the developer get its way, this forested, rugged Ozark terrain will host over 300 single-family homes and more than 100 attached housing units on roughly 200 acres, with a “resort feel”, likened to developments in Branson, MO.

The land is adjacent to Weldon Spring Conservation Area and the popular Katy Trail State Park. Development of the property would not only damage a fragile landscape, it would destroy the scenic view for Katy Trail and Busch Greenway users, and motorists traveling on I-64/40. 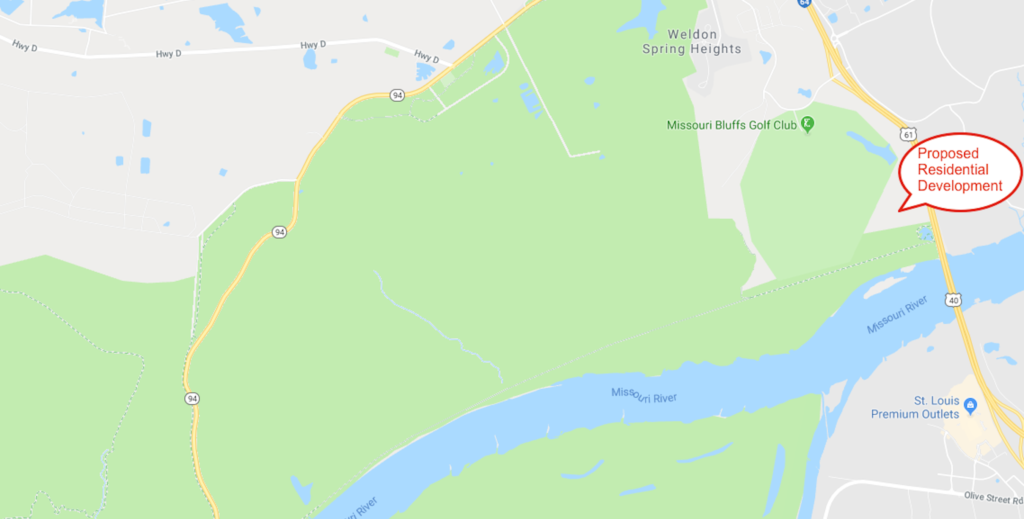 This isn’t the first time development has been proposed and opposed on this land, but stakeholders are particularly angered by the way this proposal quietly made its way to the Planning and Zoning Commission.  Hundreds of local residents and concerned citizens and many conservation organizations wrote letters and showed up to the Planning and Zoning Hearings to voice their opposition to the proposed development.

The St. Charles County Planning and Zoning Commission voted 8-1 against the proposal, which was a win for the opposition, but not the end of the fight. Rather than rejecting the proposal, the St. Charles County Council asked the developer to decrease the housing density. Opponents will continue to watch this proposal closely. For more details check out these St. Louis Post Dispatch articles: Hundreds of home planned on University of Missouri-owned land around Missouri Bluffs Golf Club and Former curator resigns from Missouri 100 to protest Missouri Bluffs development

Another proposed development was brought to our attention in early May, 2018.  A conservation easement landowner contacted ORLT about a proposed sand mine that would be developed on land adjacent to her protected property. 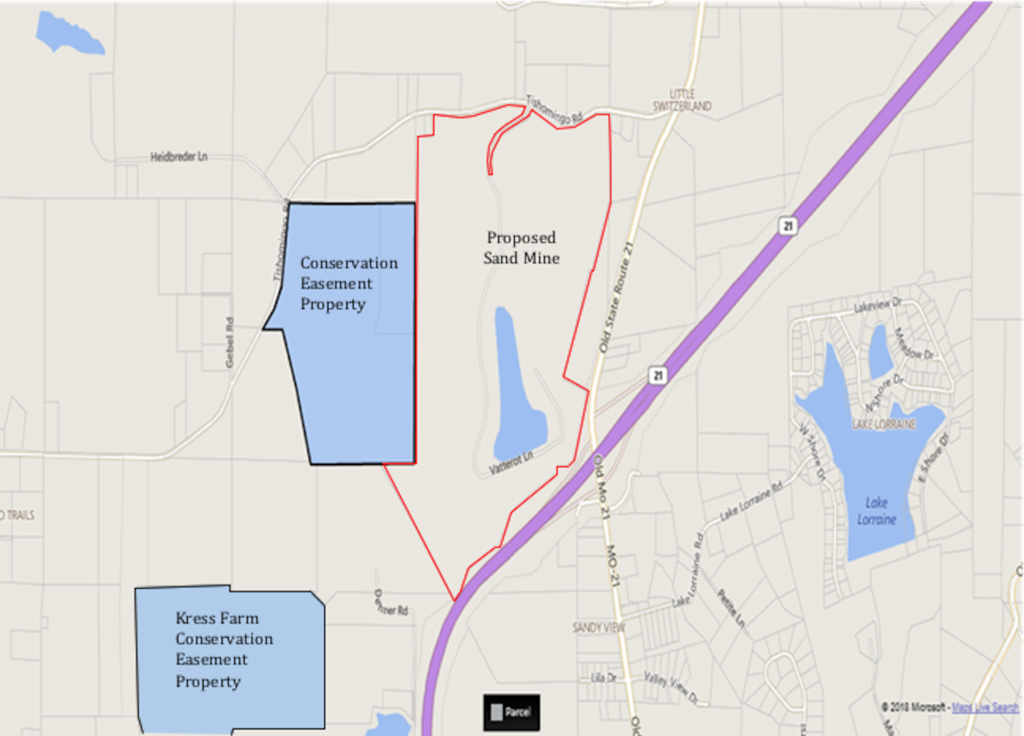 A landowner in Jefferson County, MO recently submitted a request to the Planning and Zoning Commission for a conditional use permit to allow for a sand mining operation on 250 acres located in a residential area. The sand mine operation would extract St. Peter sandstone that occurs at the surface of the earth, with 80-100 foot deep formations.

A narrow band of St. Peter crops out in a narrow band that starts in western Montgomery County and runs southeastward, along the Missouri River, to just west of St. Louis and continues south through the counties of Jefferson, Sainte Genevieve, Perry, Cape Girardeau, and Scott. As of 2012, there are four St. Peters sandstone mines along the outcrop, three of those are in Jefferson County. See map.

This specific type of sandstone is composed almost entirely of silica. The rock is harvested using controlled blasting, then broken into smaller pieces by crushing or high pressure water-jet. If the sand mine is permitted the topography of the site will be permanently altered.  St. Peters sandstone was valuable in the past for glass production.

Today, the sandstone is commonly mined for the oil and gas industry. The sand grains are pumped into the hydraulically fractured rock formations to hold open the fractures, improving the flow of natural gas and oil to wells. 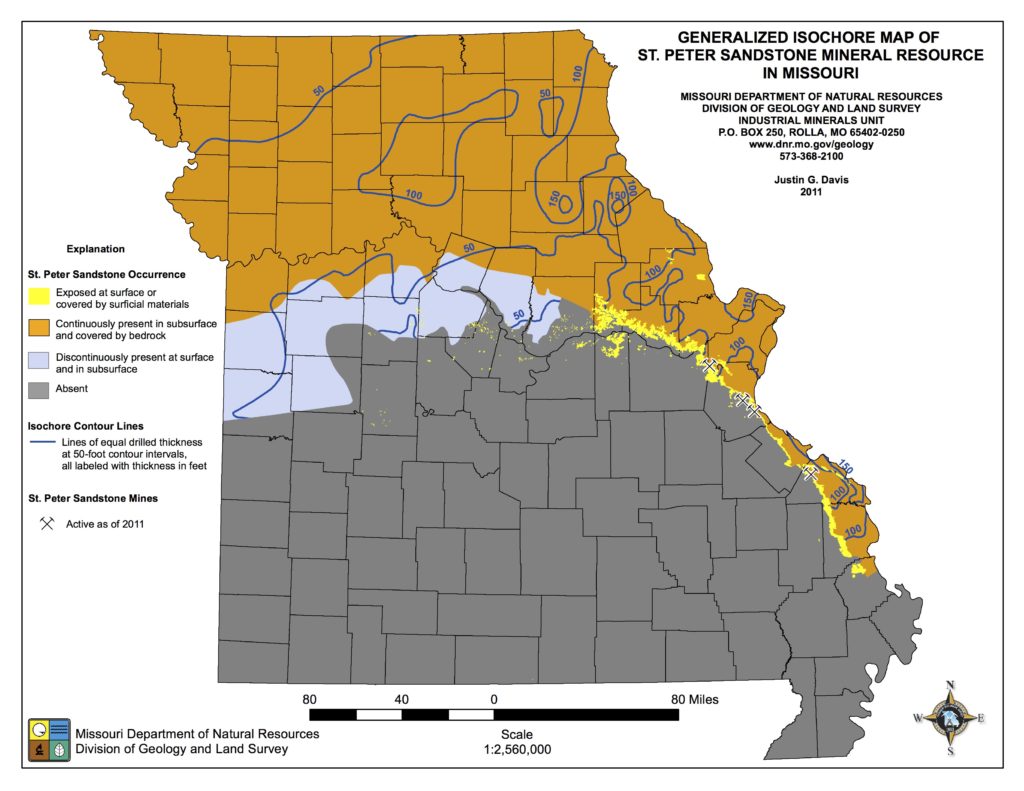 The property is currently vacant land featuring a scenic view of a lake, fields, and forest, which can be seen by motorists on State Highway 21.  ORLT holds a conservation easement on property neighboring the proposed sand mine site. This 104 acres of permanently protected property contains important natural features, including forests, glades, springs, tributary headwaters of Sandy Creek, and a variety of cliffs and rock formations, which may have cultural/archeological significance.

ORLT also protects Kress Farm Garden Preserve, which is located just a few hundred yards from the proposed sand mine.  Kress Farm is a 142-acre garden and wildlife habitat open to the public. Permitting the development of this industrial sand mine would negatively impact the conservation values including water quality, scenic value, and habitat for wildlife we protect on these properties.

Those opposed to the development began organizing when residents near the site received notice of the request for conditional use. Using social media and local news outlets, the story quickly spread. Concerned citizens braved severe storms to attend the hearing. They packed the assembly room and lobby and made their voices heard. The Jefferson County Planning and Zoning Commissioners voted to deny the request. County Council has yet to vote on the proposal.

Citizens are opposing proposed developments that threaten their lifestyle, health, safety, and the scenic beauty they value. They’re organizing and taking action. ORLT supports their position.

June 9th, ORLT members, staff and board members gathered at Orr Street Art Studios in Columbia Missouri for the ORLT Annual Member’s Meeting. The venue itself was unique as these studios are home to working area artists, and their pieces were on display allowing for a lovely ambient atmosphere during the meeting. 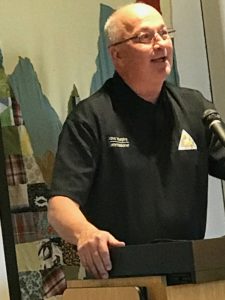 After a meet and greet time, members heard from ORLT board and staff about the latest in conservation projects. Next, MDC Commissioner Dave Murphy presented a talk on the importance of private land conservation. Everyone then enjoyed a hearty lunch and fun and a raffle which found lucky winners leaving with everything from conservation books to backpacks to trees!

After lunch, it was on to the Missouri River Canoe trip! 35 adventurous people donned life jackets and joined Mighty-MO River historian and River naturalist Brett Dufur on a guided float trip from Rocheport to Huntsdale, MO. The group enjoyed warm, sunny weather and beautiful skies as they floated down the Big Muddy listening to Brett tell stories of Lewis and Clark.

Halfway through the float everyone pulled to the shore and scampered up to the Katy Trail to what is known as the Lewis and Clark Cave. Our guide had brought watermelons along for all to enjoy. After a break there, the group finished the float, happy and content with a wonderful afternoon on the River. Members reflected on the importance of land and water conservation. 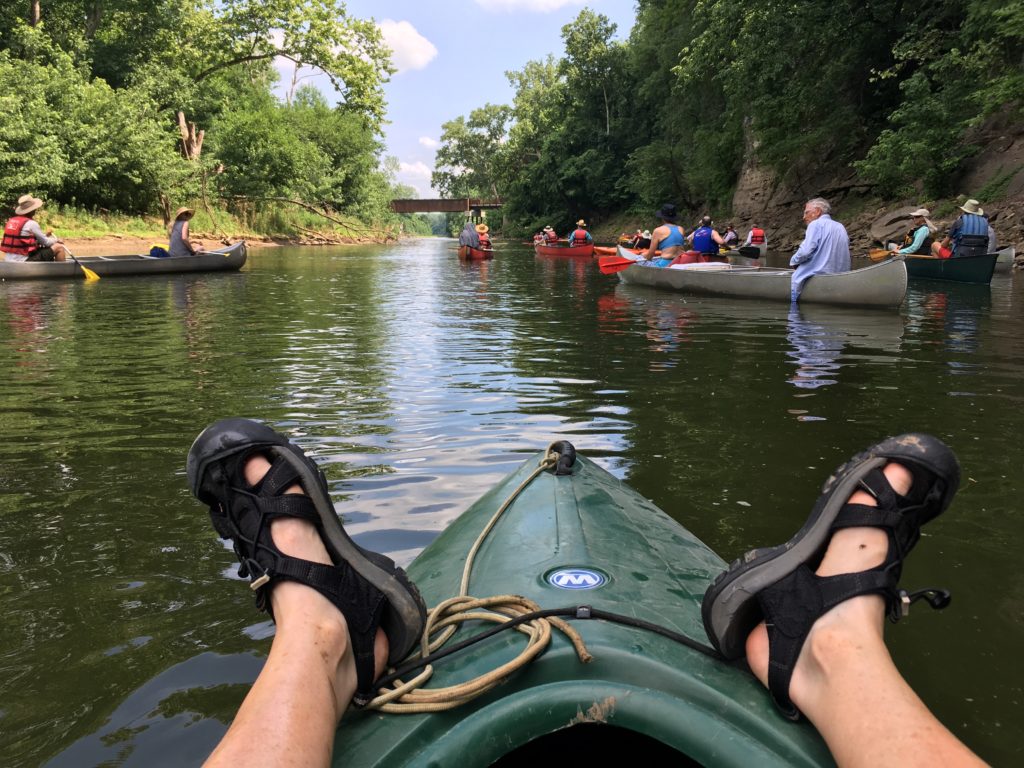