John was a contrarian of the best sort.  He never assumed anything was better because it was commonly accepted.  He preferred to test the premise of everyday things and discover a better way to do things.  He was perhaps one of the most generous souls I have ever known in sharing his talents, time, and many skills.

He distinguished himself at several universities before finishing his Ph.D. at Columbia University in New York, in Geology and Paleontology. After several years of university teaching, research, and field trips out West, he grew disillusioned with the academic lifestyle and a career path that seemed far removed from personal goals and ambitions. Moving to Springfield, Mo, he established a successful typesetting business organized as an employee-owned cooperative.  This gave him a platform to transition to a land-based community based on the principles he believed in.

John found like-minded companions to join him in this endeavor. As a founder of Sweetwater Community Land Trust, he could blend his lifestyle and environmental goals into a single path. His land-based homesteading skills were all-encompassing. He was a talented organic grower, cook, accomplished builder, designer, mechanic, welder, alternative energy advocate, and dedicated materials recycler. He prepared his food, mended his clothes, made bowls and cups from wood and pottery, and used his tools to make just about anything he needed. He believed in living close to the land with minimal harm to the Earth even while deriving his sustenance from it. He was as simple and observant as a modern-day Henry David Thoreau.  Like Thoreau, John was intentional in rejecting the norms of urban life, choosing to walk closely and naturally in nature.  I think he would like to be known for that above all else. 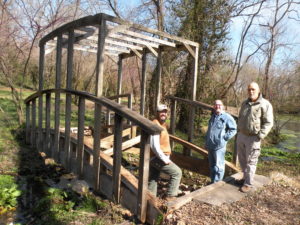 Once John built his house at Sweetwater, his previous training in computers became his new home-based livelihood, as an independent programming consultant. John was logical, hands-on and pragmatic by nature.  While I don’t think he believed in perfection as an ideal, he was nonetheless an all-consuming perfectionist in everything he did.  His mind was rigorous with the discipline and detail of a scientist and he applied that to all his endeavors.  John never gave up his deep interest in geology and paleontology. His early research and teaching trips to remote Far West areas resumed later in life when he informally joined long summer field trips out West with students and research professors from Springfield and elsewhere.

John came in contact with what was then Ozark Regional Land Trust (OLT) during the coincident conception of both the land trust and the Sweetwater community in the mid-1980s.  That began a growing lifelong relationship with OLT. First with Sweetwater CLT incorporated as an affiliated subsidiary, and later, he became vital as a partner in the growth of OLT as an organization.  John initially served OLT as a typesetter and editor of numerous newsletters, and for nine years helped produce the award-winning Ozark Calendar.

John also served on the OLT board and as its secretary for many years.  As OLT grew, John served for 10 years as our first land stewardship staff. He created the foundation of our project conservation baseline documentation and land stewardship monitoring program He also participated more broadly in new project development during the most rapidly accelerating period in OLT history. John’s work formed the cornerstone of OLT’s successful land-protection program.  He became an admired contributor to all aspects of OLT work and a friend to many of the landowners we worked with. 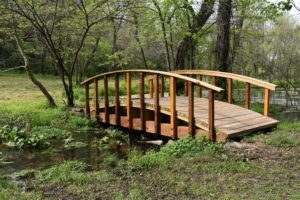 The deep wealth of skills that John brought to the organization included photography, disciplinary writing and editing, computer-based data storage and management, scientifically driven principles of data collection based on his own GPS mapping and surveying skills, land records searching, geography and geology, and an ability to create detailed documents and careful conservation easement editing.  Notably, he used his AutoCAD design skills and refined craftsmanship to build the bridge over the tributary of Sarcoxie Spring and Preserve. He also built specialized seed harvesting tools for the Woods Prairie project His handcrafted barn-wood framed map of the Ozarks depicting the numerous OLT projects across the Ozarks has been well appreciated at public events, even today, over 20 years later.

On Oct 1, 2005, John married another well-known OLT board member and volunteer, Norma Ellis Beene Cutler, a lifelong resident of Harrisonville, AR.  They found great companionship in each other’s company until her death on Feb 19, 2016. Similar and different in many ways, they complemented each other well.  During this time and after, John found great personal satisfaction in establishing deeper bonds with his siblings, and his children and grandchildren from a marriage much earlier in his life.

John did not believe in theories or big ideas to save the world.  He was about as down-to-earth as anyone could possibly be. A staunch individualist, he believed in personal responsibility and freedom above all else. He occasionally repeated an old Groucho Marx joke that he “would not belong to any organization that would have him as a member!” But John saw in OLT something that was so simple, basic, real, selfless, and immediate in the way we worked directly with landowners to codify their relationship with the land, using tools such as conservation easements, community land trusts, preserves, and environmental agreements.

Not believing in the so-called “grace of authority,” John felt that OLT did not tell people what to do, but rather worked in a voluntary way to accomplish truly noble and mutual goals.  That was the same vision he had for the Sweetwater community and its protection of the land.  John was spiritual in a solely earthy way too.  He believed in the providence of the natural world rather than abstract theories of divine providence.  Like Walt Whitman, John was deeply curious about everything that could be called soul, spirit, and interpersonal. Through his relationship with the Sweetwater Community, OLT, Ozark Area Community Congress, and his friends inhabiting the Ozarks, who deeply believed in healing themselves and the world around them, he found ways to pursue his inner search for peace and love. John taught many people, including himself, a path to clearing out useless emotional blockages to find one’s true self through a process called co-counseling. In the end, he knew, like many of us have learned, that this is only a journey, and what matters is that it must be taken with care and compassion for ourselves and each other. Perhaps John’s biggest revelation and personal achievement, and his most difficult challenge, was learning to extend that care and compassion to himself, for his own healing and fulfillment as a fully self-actualized person.

Gregg Galbraith is the founder of Ozark Land Trust.  He thanks longtime OLT and Ozarks supporters Andy Thomas and Jan Hinsey for their contributions to this remembrance.