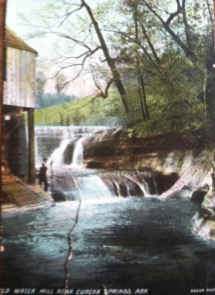 Water, it’s essential for life. The laughing waters of Hogscald Hollow, have drawn two and four legged visitors since ages long forgotten. Located in the scenic Boston Mountains of northwest Arkansas, this place has been a sanctuary for man and beast far longer than recorded time. There may be more waterfalls per square kilometer here than anywhere else in the Ozarks. Several categories of waterfalls are represented. These range from short-term rain run-offs to ten-story stair-stepped masterpieces of Mother Nature. Unfortunately, many of these no longer run due to the ever-increasing demands of mankind on the aquifers of Packard Springs. Notable waterfalls of Hogscald Hollow still flowing include: Raven Falls aka Lovers’ Leap (65 ft. tiered plunge), Hogscald Falls (15 ft. plunge fall), Auger Falls aka Corkscrew Falls, ( 6-10 ft. combination chute and punchbowl), and Sliding aka Slide-off Falls, (25 ft. slide). Additionally, combination fan and rectangular or block falls are situated where the Durham Mill once operated (see postcard). 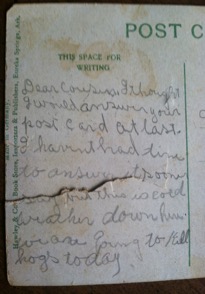 Hand written journals, in addition to oral traditions, simultaneously place many founding pioneer families of Eureka Springs, AR. in Hogscald Hollow. Carroll County was named after Charles Carrollton, the last living signor of the Declaration of Independence, and was incorporated on November 1, 1833. Carroll County shares its southern boundary with Madison County, named in honor of James Madison, our 4th president. Madison County, AR. was incorporated September 30, 1836. Sometime in 1840, on the Carroll - Madison County line, the Durham grist mill was built. This undershoot mill operated for 100 years. The mill was a stop for the Butterfield Overland Coach, 1857-1861. As part of the Confederate Kitchen, it served Southern needs during the war. Durham Mill Hollow joins Hogscald Hollow roughly 550 meters west of the famous scalds with which the area has been notoriously associated with for the past 200 years. The bare hillside behind the waterfall bears witness to the deforestation involved with building the Eureka Springs rail road line in 1882.

Hogscald Hollow: How It Got Its Name

In 1541, Hernando De Soto traded Russian boars (razorbacks) for local goods with the indigenous cultures of Arkansas. Over the next 300 years these non-native animals thrived. By the 1840s they were numerous and everywhere, forever forging the razorback as an icon of Arkansas. The earliest permanent white settlers in this part of the Ozarks were Indian fur traders, bear hunters, honey hunters, and explorers. 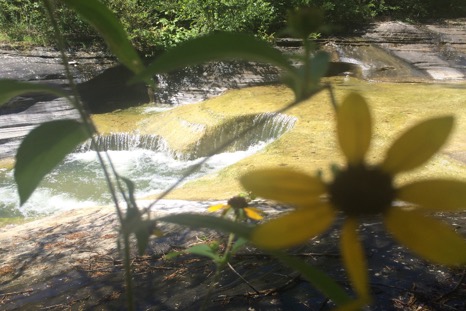 Traditions hold that some of them were taught, how to scald razorbacks in the creek by the Natives. As if the Great Spirit had taken a giant cookie cutter to the creek bed itself, swirling waters from 440 - 485 million year ago carved a series of circular depressions (like bowls) right out of the solid bedrock. These served as a scalding facility. By diverting the cold spring water around these scalds with rocks and logs, the water temperature could be controlled. Fires were built around the perimeter. Rocks were heated until they steamed, and then rolled off into the water filled depressions until, according to Freddie Todd, you couldn’t dip your finger in it more than twice. Once these boiling cauldrons settled the hogs were pulled out and the hair on their hides could be easily scraped off. This particularly unique way of scalding hogs, remained an annual fall tradition in the Eureka Springs community for at least 100 years.

Depending upon the source or time, multiple names such as scalds, vats, and kettles have been given to the holes in Hogscald Creek, but the term in geology for these formations is potholes. Potholes are made by silt and debris caught suspended in swirling funnels or whirlpools of water. These particles act as sandpaper, slowly eroding the surrounding stone. This process takes millions of years. Potholes are relatively rare geologic features and mostly confined a thousand miles away, to the Prairie Pothole Region of the Northern Great Plains, and the American Southwest.

The otherworldly serenity and abounding beauty at Hogscald Hollow secured its landscape as one of America’s earliest vacation resorts. Eureka Springs was founded on July 4, 1879, and by 1881 it was the fourth largest city in Arkansas. During the heyday of the Wild West, the 1886 Crescent Hotel in Eureka Springs was equipped with heated water and electricity. It was acclaimed as one of the finest hotels in the world. From 1886 to 1906, the Crescent provided its prestigious guests with daily passage via tally-ho to Hogscald. At that time, this lush valley was the site of Bluff Church, a brush arbor style meeting spot, where weekly baptisms took place between opposing rock shelters. People came from miles around to hear a local circuit rider, Rev. William M. Weatherman Jr. preach. Services were held year-round from 1880 - 1930. 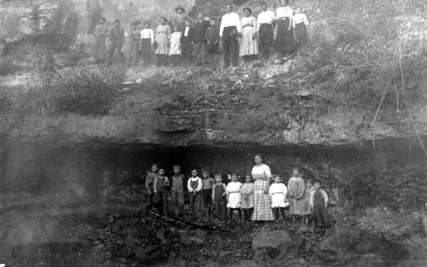 Brother Weatherman as he was known, started work on a log cabin near Hogscald in the fall of 1874. He went on to raise a dozen children in this house. Feeding such large families was hard work but Hogscald was an outdoor grocery store so to speak, with fresh food everywhere. Honey, nuts, berries, plants, and mushrooms, as well as plentiful game including dove, turkey, whitetail deer, wild hogs, squirrel, rabbit, fish, frog legs, crawdads, and shellfish could be found at any time. There were lots of pumpkin patches, too. Today more than 40 forms of fauna, over 20 bird species, 7 types of mammals, 9 kinds of reptiles, and 40 some insects have been recorded within a 10 - acre section.

Hogscald Hollow was home to a small farming community which still exists today, and the stories of its farmers, who crossed the ocean from Europe, have been retained in a myth called Raw Head-Bloody Bones. Rock shelters and sinkholes near spring fed creeks provided perfect cold storage. A hundred years ago, you could have witnessed a sorghum mill on most hills, hog butchering around the scalds, and community so called “dinner on the ground”, with the telling of Raw Head-Bloody Bones.

Hogscald borders the Cane Hill member of the Hale Formation. The 1811-12 New Madrid earthquakes had dramatic affects, reshaping this sacred ground, where according to Cora Pinkley-Call, even warring tribes met in peace for fear of angering the Great Spirit. Truck sized boulders, once clinging to the sides of cliffs, broke off and slid into their present positions. Along the north side of a hill which houses a cave and a 40 foot- deep sinkhole, megalithic spires of stone from the middle Devonian jut straight out of the ground. Such geologic disconformities attest to a major subterranean upheaval.

With the terrible floods of 1927, folks in the valleys were at a total loss. Through government interaction, a series of steps were taken such as the 1938 Flood Control Act, authorizing the construction of six dam sites along the White River. Twenty years later, the Army Core of Engineers had secured all the necessary land purchases, and construction of Beaver Dam began in 1960. By 1965, Hogscald Hollow, and connecting Penitentiary Hollow, were inundated. Abandoned houses and prehistoric campsites were covered forever.

Part of the Confederate Hospital, and home of Ezra Landon.

Clifty Creek runs through Hogscald and cuts across sections of the 400 million-year-old Clifty limestone formation which bears its name. This hollow is situated in the Elk River Hills Ecoregion of the Springfield Plateau. The site includes Buck Mountain and Sandstone Mountain. A vein of Fayetteville shale is exposed at the back side of the so - called Confederate Hospital, aka the Rock House, where Canadian stone cutter Ezra Landon lived in 1896.

Seeing how special this landscape was, neighbors in Hogscald got together and made provisions to protect part of it for posterity in 1986. An irregular tract of land including the scalds was set up as a nature conservancy with the Ozark Regional Land Trust. Today the site is home to bald eagles, and bats, salamanders, and snakes, crows, chipmunks, frog, and fox.